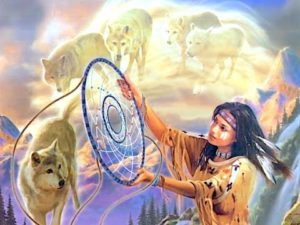 The Universe was created from small particles, molecules, which like sparks scattered into all corners of our Universe, creating planets, stars, constellations. In all living creations there is a particle of the Great Spirit, which lives and breathes together with everything.

The most important task of a person is that he needs to begin to learn himself. If he remains in the shadow of ignorance, he will be the most unfortunate person all his life. Look up to the sky, especially in the evening. You will see many stars, the Moon illuminating the sky. If you are near the sea, watch the moonlight shine brightly on the water. Since this is the reflection of the entire Universe.

You will be surprised how close the world of Spirits is and how great this world is. It is no coincidence that many of you have a strong urge to leave the city. You feel that you can no longer live within the walls of cities, as in the prison of the world. And you feel good being in nature, because Nature is the healer of your soul.

Close your eyes and imagine for a minute that you are in a completely unfamiliar world: new colours, new voices, pure streams of light – everything is new. When you forget even for a second about the world in which you are used to living, a new, magical House full of surprises opens up for you. This is your Home of new abilities. The house in which the elementals invisible to your eyes live.

Smells, visions, sounds – all this is the world of Spirits. You just need to focus on these. Listen and hear: the beating of your heart, the voice of your Soul, the signs given by your Helper Spirit.

Creatures in the form of Spirits

Despite the fact that a human being is given the opportunity to perceive Spirits, he does not know this meaning – Spirit. Multiple creatures “sticking” to a person create instead of him, and creativity here is quite extensive. With his mind, a person tries to understand that there are only bad, dirty, insignificant Spirits that can only threaten him. But, very few people understand that there is no such thing at all!

Consider the structures of Spirit and a human being. It will seem to you that they are interconnected. The energy bodies of a human being can be realized as the bodies of Spirits. But the cause-effect link has been broken for many centuries, and the energy flows in a completely different way than it was in antiquity.

In the form of Spirits, those energies that are around a person, around animals, around objects can be confidently defined. The understanding of the Spirit is very multifaceted. Having recognized what the Spirit is, a person will not need to constantly search for it.

The Great Spirit of the Universe. Who is HE?

I am the Great Spirit of the Universe was created in the likeness of the Source itself, shedding the light of wisdom and energy through its Eye for millions of years. Seeing me, the chosen ones come to realize all living beings in all Universes.

The Spirit of the Universe, who is he? Where did he come from and what is his role on your planet?

I see many of you asking this question, but few don’t even need the answer. Truly, how great is your thinking ..

Spirit, spirituality, desire for knowledge, life, death – everything is I, the Great Spirit.

The death of the past, the death of involving matters into human consciousness helps to perceive the line that is very thinly outlined within you. It has already been laid by the Master Universe. But not everyone can comprehend what has happened.

Everyone wants to know me. So many books, stories have been written and thousands of photographs have been made on the theme of “Spirits”. And all this is very far from the true understanding of who I am. I, as the Spirit of the Universe, dwell in your Universe, since other Higher Spirits rule in other Universes. And both on your Earth and on other planets, other Universes there is a geometric projection of the Spirits.

Spirit in my language is “Creation”, “Creativity”, Intertime.

The component of the Spirits is contained in the matter that you do not see. If you draw a line between your understanding of matter and mine, you get an interesting thing – a Spirit-Human being who rules everything and everyone. If a person is knowledgeable, then I can enter into him, I will allow him to become me. If a person strives to selfishly know me, with the claim to draw me to his being, trouble awaits him. Yes, that is right. And there is nothing to be afraid of.

Since I am very sensitive to your thoughts, to your actions. If a person striving to become a shaman damages my benevolence even for a second, tornadoes, earthquakes will overthrow the Earth. Since such people are strong and a lot of things depend on them.

Conclusion: a tornado in relation to one’s thoughts and emotions is a cure for the darkness of consciousness, a blackening of the emotional plane.

Having regenerated inside, the whole Earth will be regenerated. So my secret has been revealed to you.

Think, shamans. Feel my call in your hearts. Since I have chosen you. You are few.

I am the Great Spirit of the Universe